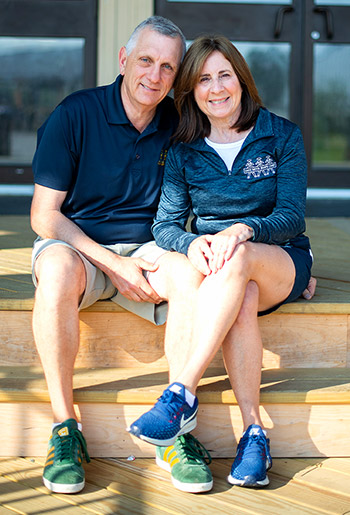 Jane and Dan Kagan have been the owners and directors of Lake Bryn Mawr Camp for more than two decades. The parents of three grown Bryn Mawr Angels, they have experienced camp from every perspective — as campers, as staff members, as parents, and as directors.

Jane grew up in camping, spending more than 25 years as a camper, counselor and leader at her family business, Jeff Lake Day Camp. A graduate of the University of Pennsylvania, Jane is an avid scholar of all things “girl,” and over the years she has sought out experts in child development to share their expertise with LBMC staff and camp families through training, events and camp publications. She is actively involved with the American camping Association as the Chairwoman of VOCE, Veterans of Camp Experience.  She also serves on the Board of the Wayne County Camp Alliance.

Another lifelong camper, Dan was mentored by the late Morry Stein, former director of Camp Echo Lake. A graduate of the University of Arizona with an MBA from Fordham University, Dan sits on the board of the Wayne Memorial Health Foundation, has served as a board member for Project Morry and the American Camp Association – New York Chapter, and is a past co-president of the Wayne County Camp Association.

Jane and Dan have been joined in the family business by their daughter Eliza, a second-generation camp director who has spent nearly every summer of her life at Bryn Mawr. During the summer, Eliza serves as the division head for Bunk One and LITs. In the winter, her job responsibilities include overseeing social media, coordinating alumnae outreach, and visiting new camp families, as well as planning events for the summer to come.

Say hello to the second generation of Kagan leadership at LBMC! The most recent addition to our year-round staff, Eliza has spent nearly every summer of her life at Bryn Mawr, taking just a few years off to gain experience as a day camp counselor. A second-generation camp professional, Eliza is the division head for Bunk One and LITs in the summer. During the winter, her job responsibilities include overseeing our social media, coordinating alumnae outreach, and visiting new camp families, as well as planning events for the summer to come. Eliza graduated from the University of Pennsylvania, where she majored in Communications and was the President of her sorority. She is currently pursuing her Masters in Business Administration at Rutgers. 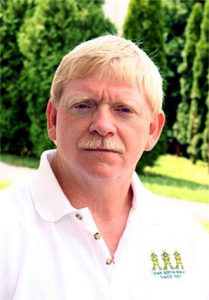 Bill has been an integral part of summer at LBMC for more than 35 years. Officially, he is the director of our gymnastics program and supervises operations and security. But that doesn’t begin to describe his role at camp, which includes everything from overseeing movies and trips to filling crucial roles in top-secret camp traditions like Chocolate Banana Night.

During the winter months, Bill makes his home in St. Mary’s, Ohio, where he is retired from teaching special education. A former Ohio Coach of the Year, Bill coaches level 3-10 gymnasts at Universal Gymnasts in Columbus, Ohio. He and his wife Carrie have three grown children (former 11-year camper and group leader Brooke, and staff members Ty and Scott). Bill’s granddaughter, Braelyn, is a second-generation Bryn Mawr Angel. 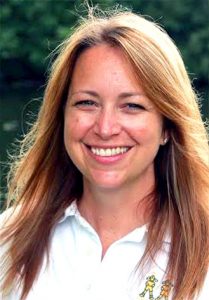 A member of our full-time, year-round staff, Jocelyn guides our staff recruiting and hiring process. In the summer, she is our Junior Camp Division Head as well as the director of our Explorers program. Jocelyn is a graduate of George Washington University with a degree in sociology and psychology, and she holds a law degree from Brooklyn Law School. Before joining the LBMC family, she spent more than 15 years as a college consultant, assisting students with undergraduate and graduate school applications. She and her husband Jeremy have three daughters, all Bryn Mawr Angels. 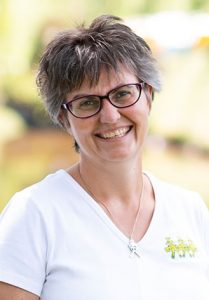 “Max,” as she’s known to our campers, first came to Bryn Mawr as a gymnastics counselor more than 25 years ago. After several years as a counselor and group leader, she took some time away from camp, returning in 2006 as our Senior Camp Division Head. During the winter, Max (with her basset hound, Fred) lives in Cleveland, Ohio, where she teaches high school science and stays involved in gymnastics as a USA Gymnastics official with a Level 10 rating. In 2015, the Ohio High School Athletics Association named her Official of the Year. Maxine has a bachelor’s degree in biology from Bowling Green State University and a master’s in curriculum and instruction from Cleveland State University.